Orion Pharma wins the DIMECC Prize 2020: Systemic use of PoDoCo program to speed up building competencies in R&D 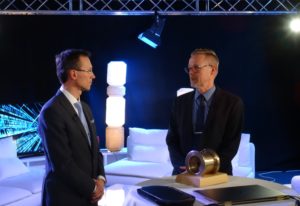 The award-winning systemic collaborative approach of Orion to use DIMECC services as a mechanism to speed up recruitment and competence building in R&D has been achieved through the PoDoCo program (Post Docs in Companies®). Prof. Antti Haapalinna VP, External Research and Partnering, R&D at Orion received the DIMECC Prize in Helsinki on Wednesday. The annual award was presented by DIMECC CEO Harri Kulmala at the company’s 13th annual seminar. The Data Sharing -themed seminar on industrial data utilization and sharing was organized together with Business Finland, the governmental Finnish innovation agency.

Orion Oyj has hired highly educated and doctoral degree persons to work both at their R&D and business development for a long time. Since the launch of PoDoCo program in 2015, Orion has funded 6 post docs out of which five work now have either permanent or temporary vacancy at the company.

“We use PoDoCo in a very pragmatic way: Whenever a new soon-to-be-doctor or Post Doc suggests a new challenge and collaboration with us, we use PoDoCo program as an instrument to start a two-year project during which the post doc gets research funding from foundations and a position inside our company. We cannot predict and plan, what kind of topics and doctors may pop up, but when candidates occur, we support and jointly made such a plan on a topic we see interesting. In that way, we can systematically use DIMECC as a mechanism, which brings high probability of channeling external funding and new talent to Orion”, says Professor Antti Haapalinna.

“Orion is one of the most active and systemic users of PoDoCo throughout the program’s history. For a large company, this seems to reduce cost, risk, and time needed to increase competence and the number of very highly educated personnel”, says Professor Seppo Tikkanen, Program Manager of PoDoCo.

DIMECC Prize is an award for research collaboration between commercial companies and universities. PoDoCo program was launched to motivate post docs to work at private sector and industry. In Finland, lower percentage of post docs move to industry than e.g. in Germany or US. “Orion has contributed to the Finnish industrial post doc intensity so highly, that we decided to respect this activity with the Prize”, summarises Tikkanen.