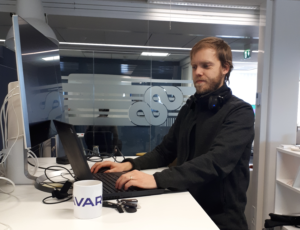 Simon Holmbacka, an Åbo Akademi backgrounded doctor, found a perfect match through PoDoCo program. Holmbacka’s second PoDoCo period ends in April, and thereafter he will be employed full time by Elisa as an industry researcher.

“I have sort of always wanted to work in the industry, but it is difficult to switch from a comfortable university position to an unknown industry position just like that”, says Simon Holmbacka.

Elisa found Holmbacka from the PoDoCo database. Jonas Kronlund, Business Design Lead at Elisa, comments: “Simon’s profile was especially interesting in the sense that he had not yet had exposure from the industry to exactly the topic at hand, but the background knowledge supported it extremely well. Our hope was that he thus would bring in some very fresh points of view. Innovation often happens in the intersection of different areas.”

The company has gained additional fresh points of view they hoped for. They have also enjoyed the doctor’s “academic rigorousness” in performing tasks.

“My background is in embedded systems and in the PoDoCo project I jumped to data science and machine learning which was almost completely new to me,” Holmbacka explains.

There was a great deal to learn from radio networks and data science, even Python and SQL. But that was just a piece of cake.

“With a PhD background it is easy to pick up new tools and new areas of research, so I urge people to not be afraid to change field of computer science, just try something new!”

For Elisa, the program ended up in a pleasant task – in hiring a talented expert that already works in the office.

“Data scientists and AI specialists such as Simon are very sought after in the industry”, says Jonas Kronlund.

To support the company’s experts, Elisa has formed an internal community for networking and sharing experiences.

Elisa is more than satisfied for having found the PoDoCo Program.

“Elisa has had excellent experiences with PoDoCo so far, and we actually applied successfully for the second time at the end of 2018, together with a new post-doc researcher.”

PoDoCo program changed Simon Holmbacka’s life in a positive way. Having found a company that even encourages remote work is important for him, since he is now able to combine a life in Turku and an office in Helsinki.

He thinks without PoDoCo, he would probably still be in the university.

“Which is not a bad thing, but I feel more comfortable doing very practical research and the salary in the industry is way better.”