How to forecast people flow?

The answer to this question will help KONE to develop its customer experience even further. And this is the question which D.Sc. (Tech.) Juho Kokkala has been researching in KONE for the last 18 months, the first six months period thanks to a PoDoCo project.

While Juho was working on his doctoral thesis about Bayesian filtering methods, he took part in the 30th anniversary of the Systems Analysis Laboratory at Aalto University in autumn 2014.

“There I met Juha-Matti Kuusinen from KONE who told me about the potential application to elevator traffic. After having heard about the Post Docs in Companies program next spring, I contacted Juha-Matti to ask whether KONE would be interested”, tells Juho. 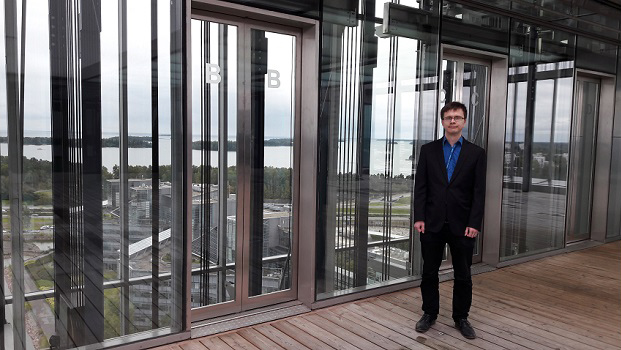 They decided to apply and Juho was one of the nine doctors chosen to the very first PoDoCo program, run by DIMECC. The grant was awarded by the Finnish Cultural Foundation.

KONE’s vision is to deliver the best people flow experience. This calls for a throughout understanding of traffic in and between buildings. KONE aims to make people’s journeys safe, convenient and reliable.

In tall buildings, elevator group control systems select which elevator to dispatch to each request, aiming to minimize waiting times. The performance of these systems may be improved by forecasting future traffic based on historical statistics. During his PoDoCo project Juho started to develop Bayesian filtering based methods for short-term traffic forecasting.

Juho’s research was conducted using data obtained from simulating the traffic of an office building in Finland. The simulated traffic counts were aggregated into incoming, outgoing, and inter-floor traffic components and 5-minute intervals.

“During the PoDoCo period, I developed a proof-of-concept forecasting model for the simplified problem of forecasting single traffic components. With the data we had, the main conclusion was that the idea has potential, but more data and research will be required”, describes Juho.

“By nature, my project work was very independent. All the practical arrangements were taken care by DIMECC and by Aalto University Department of Electrical Engineering and Automation, and I could fully concentrate on conducting the research.”

As one very concrete outcome of the project, Juho was hired permanently to KONE’s people flow planning team. The team is working on optimizing people flow in buildings.

Juho has continued to work with mathematical modeling of traffic inside a building.

“The PoDoCo grant definitely influenced the direction of my career. Without the program, I would possibly have tried to continue in academia at least for a while. But now, I can contribute to business with the research knowledge I have acquired”, Juho sums up.

“At the same time, my work is very research oriented. I am privileged applying the mathematics for developing KONE’s leading customer experience further.”